With only a month to go before I leave my volunteer job at Dinosaur National Monument, I've been working hard at refining my itinerary for the next six months. My original intent was to drive south through Colorado, Arizona, and New Mexico en route to Las Cruces, New Mexico where I will be spending three months building houses with Habitat For Humanity. 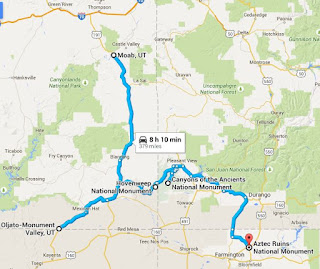 I've been captivated by the beauty and diversity of the scenery and wildlife of the high desert and western riparian environments. I thought I would revisit the Moab, UT region and then head south to the San Juan River watershed that includes:
The Animas River is a major tributary of the San Juan River. The San Juan then flows into the Colorado River, Glen Canyon, Grand Canyon, Lake Mead  (largest US reservoir) and finally ends its liquid life after a 1,450-mile journey in a dry channel across the border in Mexico.

The Animas and San Juan River basins are significant tourist destinations. They are the lifeblood of the region. 45,000 people took whitewater trips on the Animas last year. The average flow of the San Juan River at Bluff is about 2,200 cubic feet per second (CFS). The Green River at Flaming Gorge is about 1,870 CFS and for my Midwestern friends as a point of reference, the Des Moines River is about 3,732 CFS.

So, what am I leading up to with all this data? Hopefully you've seen the recent news reports of the disastrous Gold King Mine waste dam breach near Durango. The breech released about three million gallons of water polluted with heavy metals, including lead, arsenic, cadmium, aluminum, copper and calcium. These metals linger in the environment. The mine was last active in the 1920s, but its been leaking toxics at a rate of 50 to 250 gallons a minute for years. Notice I didn't call this an accident! While the EPA has accepted responsibility for the breech, the root cause of the breech lies spread widely with the mine owners, bought-and-paid-for politicians, business leaders, and some local residents.

Can life survive in the Animas River?

How this impacts my RV travels remains to be seen. I doubt that the river rafting companies will reopen soon. I suspect that I'll still visit the area in September when, hopefully, the surge of toxins will have fully passed and the impacts better known, but the toxic contamination will undoubtedly remain.

The economic consequences upon the region will undoubtedly linger for untold years. There are hundreds of other mines like the Gold King that continue to be toxic threats to the region.

Who do you think is responsible for the desecration of this important watershed? If you were living there what would you do?