Ancestral Puebloans of the Canyons of the Chapin and Wetherill Mesas

High on my 2015 travel bucket list has been a visit to Mesa Verde National Park, a UNESCO World Heritage Site, near Cortez, Colorado. My previous day's visit to nearby Hovenweep National Monument helped set the stage for the treasures that Mesa Verde presents. The UNESCO website succinctly describes the merits of the park:

The Mesa Verde landscape is a remarkably well-preserved prehistoric settlement landscape of the Ancestral Puebloan culture, which lasted for almost nine hundred years from c. 450 to 1300. This plateau in southwest Colorado, which sits at an altitude of more than 2,600 meters (8,530 Ft), contains a great concentration of spectacular Pueblo Indian dwellings, including the well-known cliff dwellings. This rich landscape provides a remarkable archaeological laboratory for enhancing our understanding of the Ancestral Puebloan people.
Some 600 cliff dwellings built of sandstone and mud mortar have been recorded within Mesa Verde National Park – including the famous multi-storey Cliff Palace, Balcony House, and Square Tower House – and an additional 4,300 archaeological sites have been discovered. The cliff dwelling sites range in size from small storage structures to large villages of 50 to 200 rooms. Many other archaeological sites, such as pit-house settlements and masonry-walled villages of varying size and complexity, are distributed over the mesas. Non-habitation sites include farming terraces and check dams, field houses, reservoirs and ditches, shrines and ceremonial features, as well as rock art. Mesa Verde represents a significant and living link between the Puebloan Peoples’ past and their present way of life."

The Mesa Verde Visitor Center, Chapin Mesa Archeological Museum, and signage at each site comprehensively outlines the evolution stages of the Mesa Verde community culture and physical infrastructure during the following five periods of history:

The park educational displays allow the visitor to easily observe how building construction techniques of individual homes and ceremonial structures changed over time in response to:
I could have spent many days exploring all the features of this park. The main archaeological features are are located at the far end of the entrance road that climbs for almost 20 miles.

RV campgrounds are located near the park entrance and in nearby towns. 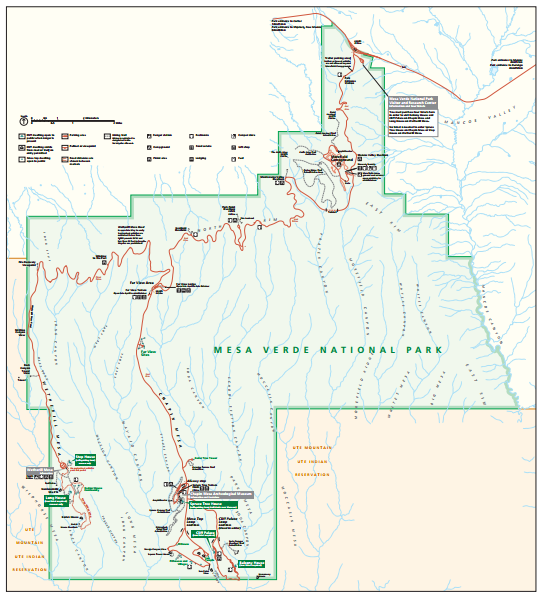 You need to visit this park!