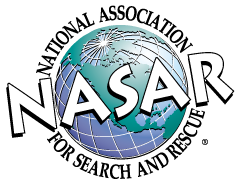 Over the last two weekends I participated with eleven other students in the 30 hour National Association of Search and Rescue (NASAR) SARTECH II Fundamentals class in Arkadelphia and Hope, Arkansas.

The first weekend of training consisted of classroom instruction on wilderness survival, as well as, search and rescue organization, theory and practice.

The second weekend was almost entirely in the field practicing theory and skills searching for a theoretical lost person in the thorny woods of central Arkansas. We were "called-out" to a deer hunting camp to look for lost female hunter that failed to return to camp. Looking for possible footprints we searched the base, performed a probability assessment of where the lost person might be and then formed "hasty search teams" to hunt for clues and signs. After finding footprints belonging to the person we tracked her trail step-by-step and found other clues down a dirt road on the way to a four way trail intersection. Since it was midnight when we arrived at the intersection and most of us were spent from a long day, we pitched camp to rest and resume the search at daybreak.

After a wet, sub-freezing night we resumed the search following more clues suggesting that the possibly confused, disoriented, or ill person changed directions, doubled back on the trails. She was initially unresponsive to our auditory calls using her name. As we following her trail eventually getting closer to where she pulled off the trail for the night she responded to our signals. She was found just off the trail in the woods.

After treatment for her deteriorated medical condition, she was carried out on a Stokes wire litter for transfer to a medical facility.

Rescues typically take about 72 hours to resolve themselves. What we learned from the exercise was how to apply resources on most land-based search and rescues, how to organize a search and assume specific roles as leaders, searchers, and record keepers. Then to round out our appreciation for the subject the instructors added knowledge components about incident command structures, environmental hazards and first aid, land navigation & orienteering; ropes, knots and & standardized rescue equipment; and legal obligations of search and rescue personnel.

At the end of the sessions we took a 145 question subject matter and orienteering exam that, if passed, certified us as SARTECH III level SAR techs. When we return to Arkadelphia in a month's time to pass the field exam, we will gain certification as SARTECH II level techs. The field exam on March 13 consists of six sections:

Training beyond these fundamentals is highly encouraged. Specializations include man tracking, K-9, mountain/technical rope, whitewater, avalanche, and underwater search and recovery.  When I lived in southern Illinois I served briefly on the Williamson County Dive Recovery Team. I'll probably take further classes in the years ahead as the SAR subject is interesting to me on several levels.
You too could become a member of a rural or urban search and rescue team. There are lots of duties that can be performed at headquarters if you are not able or inclined to go into the field on a physical search.