The 19th century was the best of times and the worst of times.  On three divergent fronts. We had the idle rich that glorified luxurious travel We had pioneers braved the wilderness to forge a new nation, and we also had the uneducated/quack doctors and patients that sought and promoted quack cures for all sorts of maladies.

Last week I took a side trip to the mother of all national park units, Hot Springs National Park in Arkansas. Besides my peculiar interest in questionable medical cures, I had been offered a volunteer park service job there this summer and wanted to check it out.

In about 1870 westerners increasingly traveled to Hot Springs for the thermal baths and to drink the mineral water. Native Americans used it for centuries before that. It took another 100 years for the site to finally be placed on the National Register of Historic Places for its own protection. There's been a long history of conflicts among private landowners, entrepreneurs, and the federal government on what should be regulated to protect this natural resource. Like
Malheur National Wildlife Refuge in the news over the last month, the federal government won the fight but works in partnership with local interests.

What intrigued me about Hot Spring's bathhouse row of seven historic spas was the segregated and regulated pseudo science of the operations. First of all these were initially white-only establishments primarily tended to by African-American attendants. The National Park Service rightly now exhibits the role of race in the operation of the facilities.

As for the pseudo-science aspects, you need to realize that many of the treatments offered at the spas then required a doctor's prescription to acquire. Not that there wasn't an economic motive to provide them to anyone that could pay the bill. Three of the treatments' apparati are captured in the adjacent photo I took.

~ (Right, background) Mercuric sitz-baths where one sat in a short tub and allowed mercury-laden water to be absorbed through your mid-section.
~ (Foreground hoses) Intense, high pressurized enemas.

The more traditional regimen for the average patron was: 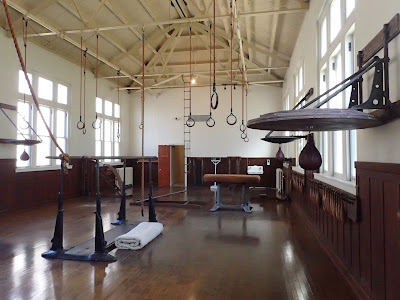 All in all an interesting afternoon's visit and worthy of a visit and perhaps a modern spa treatment at one of the many commercial spas now still operating in Hot Springs, Arkansas. Should you choose to replicate "taking the waters" for your health I encourage you to skip the mercury baths and electrified baths.