A Hike to Aviation Tragedy on Mt. Humphreys


It was in the early hours of September 15th, 1944 when Second Lieutenant Warren E. Crowther was piloting his TB-24J aircraft (aka a B-24 bomber) with seven other personnel aboard: 4 student pilots, 2 engineers and a radio operator. The plane had taken off from Kirtland Field in New Mexico and headed out for a nighttime training flight scheduled to return later to Albuquerque. This was the plane’s and occupants’ last flight. All men aboard died when pilot error caused the plane to fly directly into the side of Arizona's highest peak, Mt. Humphreys.

The remains of the B-24 airship have resided on the western side of the Mt. Humphreys for over seventy years. But the plane is not alone. Amazingly, a second plane crash occurred just a few days after this crash on Sept. 18, 1944. A B-17 Flying Fortress crashed on the opposite side of the mountain near Bear Jaw Canyon, killing four soldiers. Only a year earlier on March 5, 1943, another B-17 crashed into the northeast side of nearby Mt. Elden. An R4D-8 Gooneybird plane, crashed on Mt. Humphreys on Jan. 21, 1943. Finally, B-18 Bolo plane crashed in these volcanic mountains on Oct. 2, 1941. Truly, the 1940s were not good years for aviation in the San Francisco Peaks.

I have lived at the southern base of Mt. Elden all summer and will have spent over sixty working days this summer (nearly every weekend) hiking and driving around Mt. Humphreys and the other San Francisco peaks. Yet, in that time I haven't had the success in visiting the crash site. I finally succeeded on September 25th when I spent six hours hiking to the elusive B-24 crash site. I was its solitary visitor this day. 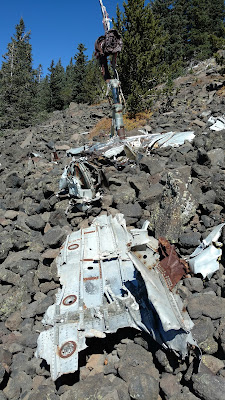 As a federally protected historical site, any unmanaged visitation to it the site can result in the loss of historical integrity. People have built badly designed social trails to the site, stolen historical artifacts, and otherwise altered the location and appearance of objects found there. I’m posting the GPS coordinates to the closest plane artifacts below with the sincere wish that visitors respect this historical military site and show some sensitivity to the fact that our military personnel lost their lives here during their service to country.

Hiking to the crash site is very dangerous. The one incomplete social trail to the site is steep, barely able to be followed, and very difficult to traverse. Only a few hard-to-locate rock cairns mark the route. Once one get to the GPS coordinate provided, more crash debris can probably be found easiest by just proceeding north, perpendicular the volcanic scree field fall line.

While the site is than a third of a mile from the main Humphreys Trail, it takes about an hour to safely get there.  It should not be attempted alone and it is inadvisable to ever take children to the location. One must pass over seemingly endless lava scree fields. It is just far too easy to trip, fall on sharp and tipsy volcanic boulders, drop into deep holes between rocks, and sprain or break ankles.
I fell several times. 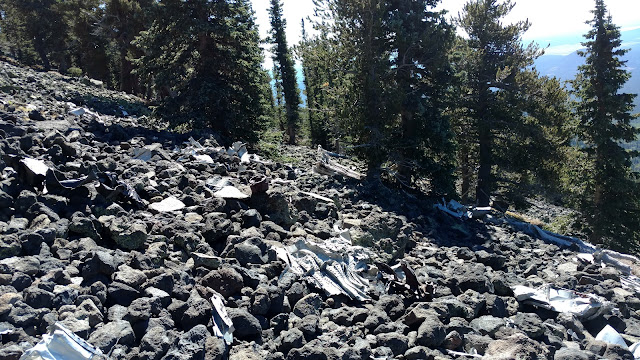 From the Humphreys Peak trailhead the hike to the crash site is about 7.2 miles long, round trip, has a rated difficulty of 4.3 out of 5, and requires an ascent a of more than 2,100 feet to an elevation of over 11,000 feet.

The views from the site to the west are magnificent. Over 20 miles away can be seen Williams Peak. Kendrick Mountain is seen to the right, and numerous volcanic cinder cones and ancient volcanoes are viewable across the verdant valley. Off to the north nearly 100 miles away can be seen the north rim of the Grand Canyon. During the fall changing of the aspen leaves color, nature’s complexity, danger, and majesty are on full display.