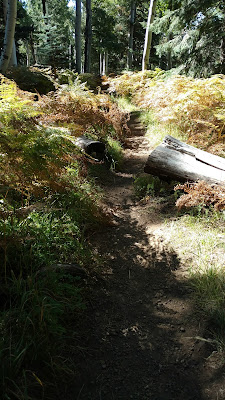 The Kachina Peaks Wilderness near Flagstaff, Arizona affords the outdoor enthusiast ample opportunities to explore nature by car, bicycle, horse, foot and snowshoe. One of the nicest trails in the wilderness near where I’ve been volunteering this summer at Mt. Humphreys is the Kachina Trail. The moderately strenuous trail is a 5.2 mile segment passing around the south side of Agassiz Peak at an elevation of about 9,000 feet.

I hiked the Kachina Trail in mid-September out from the western trailhead for a distance of about three miles to where there is a great view southward to the city of Flagstaff resting at about 7,000 feet. The aspen tree leaves were only just starting to yellow due to the first hard frost on the mountain. The bracket ferns had all started to brown and the annual cycle of life was present everywhere.

The trail gradually descends with a few welcome grade changes to keep things interesting and your knees from experiencing the constant impact of stepping downward.

The violence of the mountains creation is present in the form of occasional cliffs formed by volcanic action when these San Francisco Peaks were forged as a stratovolcano nearly 400,000 years ago. 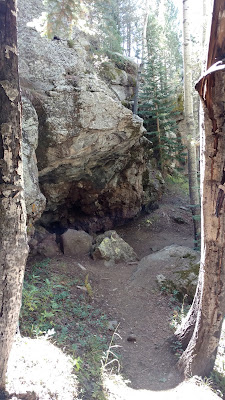 If you study the rock face one can readily descent the various strata of lava flows. Lower on the mountain there exist lava tube caves created by rapidly cooling surface crusts of fast flowing magma. 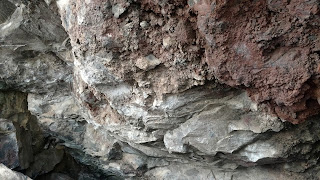 The trail resides in the largest Ponderosa Pine (Pinus ponderosa subsp. brachyptera) forest in the nation. It is interspersed with the Aspen trees that have difficulty establishing significantly sized stands due to the high canopy of the Ponderosas. Only through lightning caused fires would the aspen find the opportunity to reestablish themselves in this environment. Through the use of prescribed forest fire burns or timber thinning projects by the US Forest Service have the aspen a chance to prosper.  Evidence of nature's fire is evident along the trail where openings have been created for natural plant succession to occur. 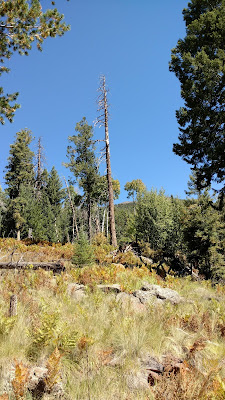 Fire exposes the rocky and volcanic pumice strewn surface where new plants have difficulty taking a root hold on a very porous surface,

Where trees have died and allowed to slowly decompose they build moisture retaining moisture to allow grasses, flowers, and fungi to prosper. Big plants give birth to new life. 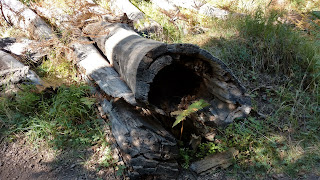 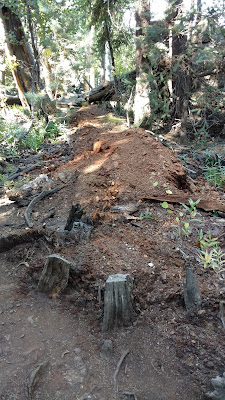 The rock, themselves often speed the tree decomposition by cleaving the trunks as they strike the ground with enormous force. 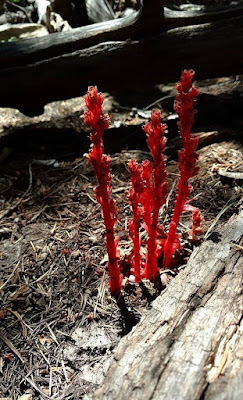 The trees do fight back by tenaciously clinging to rock outcroppings for many hundreds of years and dropping their seeds into the rock crevices to encourage the next generation of growth. 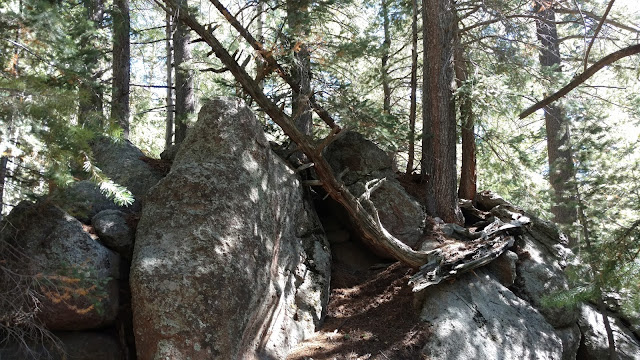