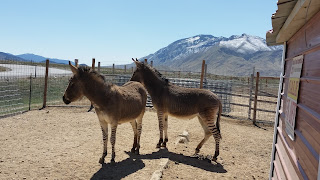 Can you identify the two animals? <snark> 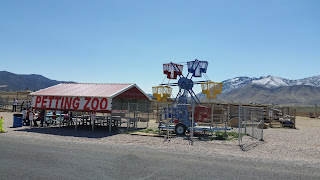 In Fillmore, Utah (yes, named after Millard) I began the day at Utah's first territorial capital. Mormon plans went awry when the influx of non-Mormons couldn't see locating the capital so far away from the population center in Salt Lake City.

When I arrived the city Easter egg hunt and Easter bonnet contest were well underway. When I entered the territorial museum building the broadcast Mormon church service was blasting away. It seemed somehow appropriate in this state owned building given the history of Brigham Young hiding the Deseret News Press in the building for two months during the Utah War. It had similar contents to the Pioneer's Museum in Salt Lake that I toured earlier this month, but with more local artifacts.

I left to drive an hour N.E. to the Topaz Japanese Internment Camp.
Posted by Bob at 5:53 PM