John Wesley Powell and the Gates of Lodore, 1869 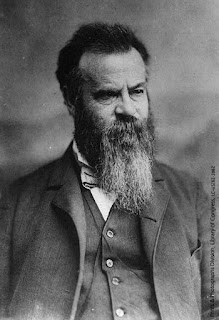 John Wesley Powell (photo below) is famous for his explorations of America’s West, in particular the Green and Colorado Rivers. Author David Worster (A River Running West: The Life and Times of John Wesley Powell) has described Powell (or Wes, as his friends called him) as a fervent nationalist, a trained scientist and skilled ethnographer… He has come to represent all that is daring and wise in the move west: a one-armed man who took a boat down the wild Colorado River, who undertook to survey the great reaches of the new frontier, who stood up for indigenous people and protected the environment.”
Three days after the driving of the spike at Promontory Point, Powell met his expeditionary crew to prepare for his adventure. A few days later he began his journey in four wooden boats from the Flaming Gorge area of Wyoming into what is now Dinosaur National Monument in Colorado and Utah. Powell and crew of nine stopped and stayed overnight on June 6th, 1869 on the very spot my RV resides today: the entrance to the Gates of Lodore on a wide elevated sandbar occupied by sage and pinyon brush and a couple very old Cottonwoods.
Rising up to the south of this spot is a cathedral like chamber that draws your vision up and into the mysterious canyon. Sometimes glowing, sometimes sullen, and occasionally shrouded in a Shangri-La-like mist what lies beyond the entrance was a great mystery to Powell. All he really knew is that in a distance of 900 miles the river dropped nearly a mile in altitude. 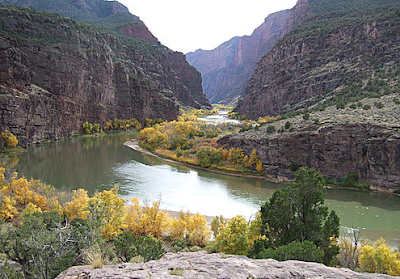 On June 7th this one-armed man climbed the a couple thousand feet up mountain at the entrance to try and get a better view of his future. He wrote in his journal that night “The river fills the channel from wall to wall… and as I write, the sun is going down and the shadows are setting in the canyon. The vermillion gleams, and rosy hues, the green and grey tints are changing to somber brown above, and black shadows below. Now ‘tis a black portal to regions of gloom. And that is the gateway through which we enter (on) our voyage (of) exploration tomorrow – and what shall we find?”
Unbeknownst to him ahead lay true disaster, but I leave that story for another day. Better that you begin your own journey mental journey down the river in the same mood of romantic adventure that captured these brave men. As they began their journey one of Powell’s crew suggested the formal name for this location based on his remembrance of an English waterfall in a poem written by Robert Southey:

The Cataract of Lodore

How does the water
Come down at Lodore?
My little boy asked me
Thus once on a time
And moreover he tasked me
To tell him in rhyme.

Anon, at the word,
There first came one daughter,
And then came another,
To second and third
The request of their brother,
And to hear how the water
Comes down at Lodore,
With its rush and its roar,
As many a time
They had seen it before.

So I told them in rhyme,
For of rhymes I had store;
And ’t was in my vocation
For their recreation
That so I should sing,
Because I was Laureate
To them and the king.

From its sources which well
In the tarn on the fell;
From its fountains
In the mountains,
Its rills and its gills,—
Through moss and through brake
It runs and it creeps
For a while, till it sleeps
In its own little lake.

And thence at departing,
Awakening and starting,
It runs through the reeds,
And away it proceeds
Through meadow and glade,
In sun and in shade,
And through the wood-shelter,
Among crags in its flurry,
Helter-skelter,
Hurry-skurry.

Here it comes sparkling,
And there it lies darkling;
Now smoking and frothing
Its tumult and wrath in,
Till, in this rapid race
On which it is bent,
It reaches the place
Of its steep descent.

The cataract strong
Then plunges along,
Striking and raging,
As if a war waging
Its caverns and rocks among;
Rising and leaping,
Sinking and creeping,
Swelling and sweeping,
Showering and springing,
Flying and flinging,
Writhing and ringing,
Eddying and whisking,
Spouting and frisking,
Turning and twisting,
Around and around
With endless rebound!
Smiting and fighting,
A sight to delight in;
Confounding, astounding,
Dizzying and deafening the ear with its sound.

Collecting, projecting,
Receding and speeding,
And shocking and rocking,
And darting and parting,
And threading and spreading,
And whizzing and hissing,
And dripping and skipping,
And hitting and splitting,
And shining and twining,
And rattling and battling,
And shaking and quaking,
And pouring and roaring,
And waving and raving,
And tossing and crossing,
And flowing and going,
And running and stunning,
And foaming and roaming,
And dinning and spinning,
And dropping and hopping,
And working and jerking,
And guggling and struggling,
And heaving and cleaving,
And moaning and groaning;
And glittering and frittering,
And gathering and feathering,
And whitening and brightening,
And quivering and shivering,
And hurrying and skurrying,
And thundering and floundering;
Dividing and gliding and sliding,

And this way the water comes down at Lodore.
Posted by Bob at 4:00 PM