Toad Haul Manor Journal – June 4, 2015
Rain in northwestern Colorado is low and infrequent. Most rain arrives in May concurrent with the snowpack melt from the Uinta Mountain range. Between the LoDore Campground and Flaming Gorge Reservoir to the north the Green River is fed by numerous small drainages plus several seasonal creeks including the Vermillion.
Summer comes quickly after the rains cease. Until then whenever it rains the Green River turns brown carrying with it enormous quantities of sand from the adjoining hills. Now that the river level has dropped, the once clean concrete boat ramp at the campground is now covered in 18”of sand deposits.
There’s a nearby river gauge at Vermillion Falls where the abrasive contents cascade over a twenty foot high escarpment before entering the Green River just above the campground. 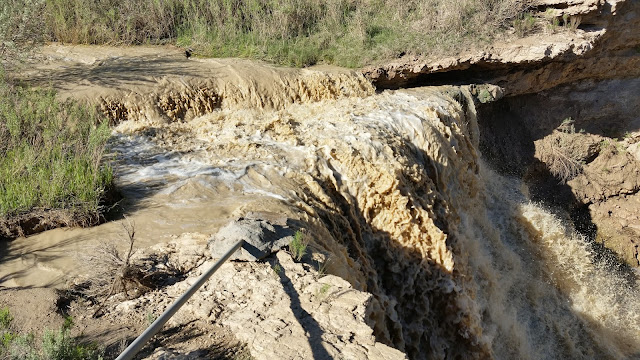 Most of the eroded sand washed are flat and become dry or desert marshes during the dry season and, as such, very quickly become breeding beds for voracious mosquitoes that are presently inundating the campground. It has been in the 80’s for four straight days. This is making mowing and raft launches difficult. Yesterday while mowing a service road adjacent to the marshy draw it became quite uncomfortable. I had a swirling cloud of mosquitoes around my head constantly dive-bombing my eyes and ears. Time to order a mosquito head net! 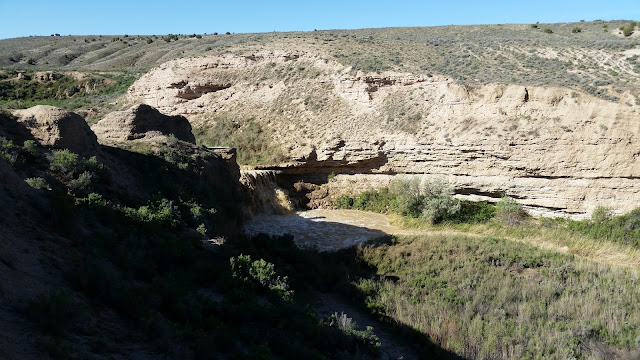 At today’s morning raft launch my green pants legs were literally covered with mosquitoes that couldn’t penetrate the fabric. My special long-sleeve also prevented pointed proboscis problems. Thankfully, once the rafters enter the Gates of LoDore Canyon the mosquitoes greatly dissipate due to lack of suitable habitat and steady river canyon breezes.
Saturday, June 6th is the 146th anniversary of explorer John Wesley Powell’s first Green River expedition camping at our location before entering the Gates Of LoDore to chart the Colorado River basin. We’re having a simple ceremony the next day including an interpretive Ranger’s talk about the importance to western expansion of this brave and deadly journey.